The balance between male and female has been out of balance for eons. Women in the United States have come to view one another as competition. Whether it be for a partner, a job, a “look” or sex, it’s all about not letting the other one get it. We have very little solidarity. I can’t believe the way women look at one another, let alone what they say. I have far too often heard women use the term “whore” to describe someone she doesn’t like. And it all starts in middle school.

When I moved in the middle of 9th grade from NY to MA, I experienced female behavior that I never even knew existed and was grossly unprepared to handle. I walked into a world of girls who were physically violent and emotionally abusive. They were jealous that I was “too pretty” and angry that I might “take their boyfriends”.  They tormented, tortured and abused me for many years.  I can’t say that I found the adult women much help at that time either. They too made judgements about how smart I was (and was not) according to what I looked like. And they were none too eager to protect me from the roving gangs of girls. One female teacher allowed a whole group of girls take me from the middle of my class to get beaten in the hallway right outside the door. 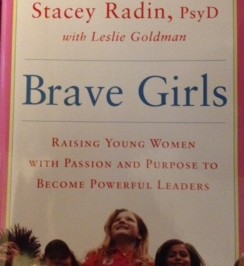 It wasn’t until I met my friend, Dawn, that I came to know a Brave Girl. She and I had just become friends when a girl from one of the many groups of girls who hunted me walked up to me. The girl said “I’m a cousin of a friend of someone who hates you and I’m gonna kill you after school.” My new friend, Dawn, looked hard at that girl and said, “No you’re not.” “Huh?” said the girl to Dawn (no one had ever done that before!) “No you’re NOT because you’ll have to go through me first!” Whoa. Seriously…whoa. That girl walked away and never bothered me again.  Dawn wanted to be my friend and wasn’t afraid of the possible consequences. She made her decisions on her own, with no care of the masses. And to this day, she is one of my soul sisters. Thus began my journey back to trusting, finding friendship and creating solidarity with my fellow females.

And, Dr. Radin wants to move the momentum of that solidarity forward in a profound way. She wants girls to learn how to express their desires, fears, hopes and dreams in a constructive and empowering group dynamic that will make powerful leaders of our future women. She created the program “Unleashed” for this very thing.

After connecting with Dr. Radin, I have found myself daydreaming about what life would have been like for me, had she been around to inspire all those girls and direct their feelings into something positive. I know that I chose this life and that my journey included that horrible time. I also know that my journey included meeting and sharing Ms. Radin’s work so that girls and women, all over the world, will unite to embrace our feminine power…xoK